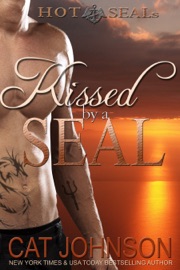 Kissed by a SEAL

Retired Navy SEAL Chris Cassidy knows the bro code—no messing around with teammates’ sisters. However, Chris never was one for following rules, and Rick’s gorgeous sister Darci is worth breaking the rules for.

Darci Mann is tired of being alone. Since Zane, the bad boy SEAL she formerly had a crush on, up and fell in love with someone else, and her best friend Ali found her own happy ending, Darci’s feeling her single status extra keenly. Though she suspects her brother’s buddy Chris would be willing to change that . . . if she decides to let him.

Up until now she’d never been inclined to do so. But when Chris is sent on an assignment for the security company he’s a partner in, and Darci goes with him, she can’t deny the underlying attraction between them. When the routine assignment turns deadly and Chris switches from charming joker to trained warrior willing to kill or die to protect her, Darci has to reevaluate her feelings about the perpetual bachelor.

The Hot SEALs Series--Night with a SEAL, Saved by a SEAL, SEALed at Midnight, Kissed by a SEAL, Protected by a SEAL, Loved by a SEAL. Note: Each story in the series is standalone and features a different hero and heroine with their own HEA or HFN.