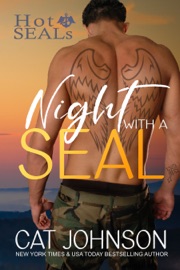 Night with a SEAL

Ten years of dedication to the Navy taught SEAL Jon Rudnick one thing—he’s not afraid to risk life and limb for his country. But when navigating military red tape begins to present more challenges than the enemy it makes Jon question his future. So does Alison Cressly, the woman who doesn’t do one-night stands or SEALs but who broke both rules with Jon the eve of his deployment to Afghanistan. He can’t get her out of his head—not while away and not now that he’s back.

When Ali’s life is threatened and military rules won’t allow him to intervene, Jon decides it’s time to take back control. The question is what would a SEAL do as a civilian? Jon’s got skills, drive and an idea, as well as a few teammates willing to cover his six. And he’s got the hope of more with Ali.

A team of sexy SEALs, a terrorist threat, and an attraction that can’t be denied . . . it all comes together in this launch of the Hot SEALs romantic suspense series from New York Times and USA Today bestselling contemporary romance author Cat Johnson.