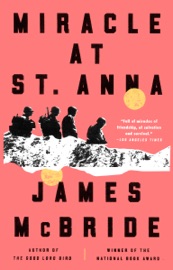 From the New York Times bestselling author of The Good Lord Bird, winner of the 2013 National Book Award for Fiction, and Deacon King Kong

James McBride’s powerful memoir, The Color of Water, was a groundbreaking literary phenomenon that transcended racial and religious boundaries, garnering unprecedented acclaim and topping bestseller lists for more than two years. Now McBride turns his extraordinary gift for storytelling to fiction—in a universal tale of courage and redemption inspired by a little-known historic event. In Miracle at St. Anna, toward the end of World War II, four Buffalo Soldiers from the Army’s Negro 92nd Division find themselves separated from their unit and behind enemy lines. Risking their lives for a country in which they are treated with less respect than the enemy they are fighting, they discover humanity in the small Tuscan village of St. Anna di Stazzema—in the peasants who shelter them, in the unspoken affection of an orphaned child, in a newfound faith in fellow man. And even in the face of unspeakable tragedy, they—and we—learn to see the small miracles of life.

This acclaimed novel is now a major motion picture directed by Spike Lee.