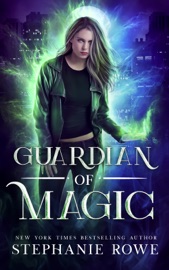 It's bad enough to have to deal with evil, right?
But when it's clever, unpredictable as hell, and has a not-so-helpful sense of humor, it can get downright annoying. Or deadly. Or end-of-the-world disastrous. Or other fun stuff like that.
I'll be honest. I thought I was prepared to defend the City of Boston against magical sociopaths with questionable morals. Once I got the job, however, it took only about thirty seconds and one dead mentor for me to discover I was wrong. As it turns out, I'm pretty much undertrained, underqualified, and surprisingly unwelcome.
But when my best friend and an immortal warrior get abducted by the GoD of Evil as part of his highly-flawed world-peace plan, guess who's the only one with a chance to save the day? Yeah. Me.
Which means, it's time for me to find my inner badass.
Or die.
I prefer badass.
About the Author: S.A. Bayne is a freaking gift to the universe, at least according to her dogs, and everyone knows dogs are world-class judges of people. She was taught to play by the rules, but after suffering numerous apoplectic breakdowns, she realized that she had to ditch the rules, figure out her own way to live, and then turn that into a high-octane, irreverent, unpredictable-as-hell, supernatural fiction that will make your day so much better just by reading it.  For more info on SAB, check out www.sabayne.com, which is chock full of good stuff.