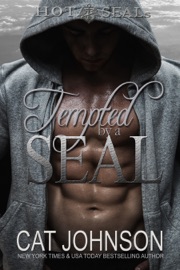 Tempted by a SEAL

Loner. Biker. SEAL…Known only as Mack to his SEAL teammates, he’s a stone cold killer when he needs to be, but he’d rather just straddle his Harley and escape from everything and everyone. The only person who calls James MacIntyre by his given name is his dad, the one family member he has left. That is until his widowed father meets a divorcee and decides to remarry. Suddenly, this woman and her daughter go from being strangers to family, all calling Mack James whether he likes it or not. The problem is he’s starting to crave hearing his name on the lips of curvy co-ed Lydia.
Don’t miss the rest of the Hot SEALs series!